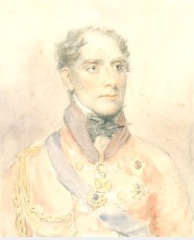 Over the years I have had brief contact with the descendants of a George Leith born 29th Nov 1789 in Old Machar, Aberdeen, Scotland. George’s baptismal record lists him as the son of Captain James Leith of Leith Hall (the third son of John Leith III of Leith Hall and Harriet Steuart (Stuart) of Auchlunkart) and an Isobel Knolls (daughter of a Thomass Knolls and Agnes Muir).

George’s birth was on the 19th or 29th of November in 1789. The record under Leith and Knolls lists – Captain James Leith of Leith Hall & Isobel Knolls in Old Machar Abderdeen had a son born, who was baptised by Mr Alex Henderson, Minister of Old Machar and named George. Witness at the baptism John Wothnall? and Margaret Sharp? (indistinguishable).

Captain James Leith went on to become the famous Lieutenant General of the 5th Division in the Peninsular War and married a daughter of the Earl of Granard and later on had a child (daughter) who did not survive to adulthood. The George born out of a relationship that has left scant information besides a brief paper record in the form of his parish church baptismal record, however, has many descendants all around the world. George passed on 15 July 1868 in East Back Road in Aberdeen, while his mother Isobel possibly passed on 12 June 1828 in Edinburgh, Scotland. George had two marriages and many children. First with Mary Stewart whom he married on 2 May 1807 in Old Machar, Aberdeen. Detailed lists of George’s family have been made by George’s descendants searching for his past.

If you have information on George and his life, please contact (email on the homepage). Unfortunately, I can only speculate as to his circumstances at the time. His claimed father was in the military and the French Revolutionary Wars were in full swing and his later marriage would not have been his first relationship. Soon after George’s birth, James was recruiting his own Regiment (Aberdeenshire Fencibles), after which he served in Ireland as the commander of this regiment then renamed the Princess of Wales’ Regiment, which was disbanded in 1803. The times that he lived in also would have impacted George Leith and it is hard to ascertain what happened. In that age, what comes to mind would have been the social stigma faced by George for his whole life. James Leith appears to have been a good man. His writing and actions speak of a fair man and also a career soldier and leader of his men, but obviously he left the child (if he ever knew about him) which I am sure he would have, to fend for himself. In terms of historical perspective and hindsight one can see James at the time marrying someone in his class e.g. the daughter of an Earl, while the child of what I am sure was his first relationship was left with no more than a brief mention in the church history books, where the few lines attest to a relationship that the society of the time would not have condoned at the time. The relationship most likely has more of a story behind it than one can read between the lines. If one wants to read about relationships at the time and the class strictures and behaviours of the British upper-class and middle-class social crawlers, the book, Sense and Sensibility from 1811 provides an insight. It is set perfectly in the exact time frame of the birth of George Leith with the book placed in between the years 1792-1797. It allows one to gain an understanding of the events, social behaviours of the time and relationships existing between the sexes between the upper and somewhat mobile middle classes. James would have married into his own class and for some money bearing his rising status. Either way it is a fascinating story if one begins to unthread the social taboos of the time some 220-230 years ago.

The above image of James is the only contemporary picture of Sir James Leith besides his image at the attack of St Sebastian, in Spain where the division is breaching the walls. The statue that was made has his likeness taken from his death mask as a bust was made of him, which was intended for his burial at Westminster Abbey. The Statue was not permitted in the Abbey, but Sir James’ burial plaque is still visible there as per the link to the Abbey.

The drawing by Benjamin Burrell of Sir James Leith is at the National Portrait Gallery. It is a pencil chalk and watercolour on paper, bequethed by W F Watson 1886.