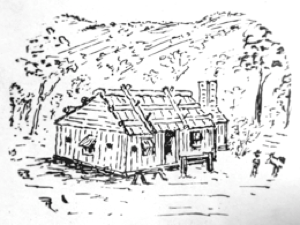 A large amount of primary material exists on the younger Leith-Hay brothers arrival in Australia around the mid 1840’s to the Darling Downs region in the then Colony of New South Wales, now in modern day Queensland. Some of it is not complete and access to historical records has helped to provide a more accurate picture. From the Downs to the Don and the Dee – The Story of the Brothers Leith-Hay (Leith-Hays) with input from James Leith Hay’s daughter Florence Gibson provides a 1940’s insight. It should be noted that there were four brothers (William, James, on November 5th 1844, Norman in 1848 and later Charles in 1852) who arrived here and at different times. William and James being the first in the mid 1840’s as they are mentioned as Justices of the Peace in the Darling Downs and also in the work by Thomas Hall on the early history of Warwick District and Pioneers of the Darling Downs as well as shipping records, newspaper clippings, letters to the Colonial Secretary and the family’s own historical record.

The reason for all the younger Leith Hay brothers move to Australia at the time is also not fully delved into and the cause for this is that their father Sir Andrew during the 1840’s experienced severe financial difficulties. The prolific spending of his predecessors and particularly his father General Alexander as well as Sir Andrew himself also contributed to the move. There was simply no opportunity for the younger generation in Scotland. The heavily burdened estate left less for younger sons. Particularly so during the difficult times of the 1840’s to early 1850’s in Scotland facing agrarian changes. The discovery of new areas of fertile land open for cultivation also acted as a lure for the younger sons of gentry. Previously limited to small and dwindling agricultural land in the home country, Australia offered the chance of riches for particularly the younger sons who saw it as an opportunity to make their own fortunes. It is notable that the core of the early pioneers arriving in the Downs and even NSW and what what was later to become Queensland at the time, were of Scottish extract, which still shows its mark today in the region where places are aptly named after landmarks from the old country.

The brothers were forced out of economic necessity to try their luck in the colonies in much the same way as the Leslies, who were also younger brothers from Warthill house in Aberdeenshire. A monument for the Leslies exists at Lake Leslie (Leslie Dam) today and the link to Scotland still strongly established in local history from the foundation runs and surviving correspondence providing a rich historical record on the beginnings of Queensland and its first trade in commodities from the Downs to Moreton Bay and beyond. The Darling Downs itself a fertile landscape in many ways reminiscent of the rolling foothills of the Grampians in Aberdeenshire with the Condamine headwaters serving the whole region. The Leith Hay brothers partly owned Toolburra in the Darling Downs region 10 kilometres from modern day Warwick and it is still named the same today.  Later William also managed  Canning Downs on the Downs in George Leslie’s absence.  The younger three brothers (James, Norman and Charles) moved into the Wide Bay District at Gigoomgan and later further north to the confluence of the Don and the Dee rivers which they named as well as their station at Rannes (named after the territorial designation of their grandfather’s great-uncle and site of the present Rannes marker and monument). This move into the uncharted territory behind Rockhampton in the Dawson Valley was a risk, which the brother’s did not ultimately succeed in on a commercial scale.

After the tragedy of the Sea Belle from Rockhampton and Norman’s death, William had returned to the UK in the 1850’s and Charles in 1858, leaving James as the only remaining brother in Australia and his growing family, as he had wedded Maria Catherine Gray, the daughter of Ipswich Police Magistrate Col Charles George Gray at Ipswich in 1854. A Steering Wheel and Society article from the 1940’s (Article_L-H) outlines some of the history of the Leith Hays in Australia. The source is fairly accurate, but it is written in a style of writing that that shows  the views still presented in 1940’s Australia,  much of which has no place in today’s society. I have kept this here to highlight the change in the social fabric to the present. Further documents and letters are attached detailing the Rannes and later Leith-Hay history in Queensland are also on the site which are again sourced from James Leith Hay’s daughter Florence Gibson’s own research on the family past in the early to mid 20th Century. Some dates and details are also incorrect. See further individual details about the Leith-Hay family members and descendants in Genealogy Section, which includes images and articles.

These photos are with the State Library of QLD – John Oxley Library.

The first shows the Ipswich Grammar in the 1870’s. Charles Edward Norman Leith-Hay was student number 183 and enrolled at the college 20th April 1870. Charles or Uncle Charlie as he was know by the family here was born in Ipswich QLD October 9th 1858, the third child of James Leith Hay and Maria Catherine Gray.

The 2nd shows East Street Ipswich in the early 1860’s and the time the Leith-Hay family was growing in Australia. Maria and James had 10 children with 7 surviving to adulthood.  The last image shows the town of Ipswich taken from the top of the Grammar School c 1870. 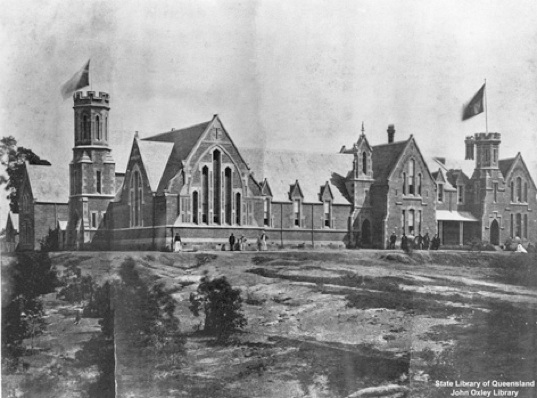 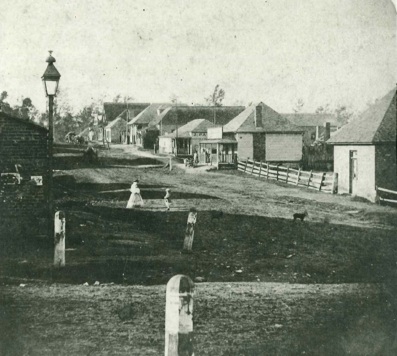 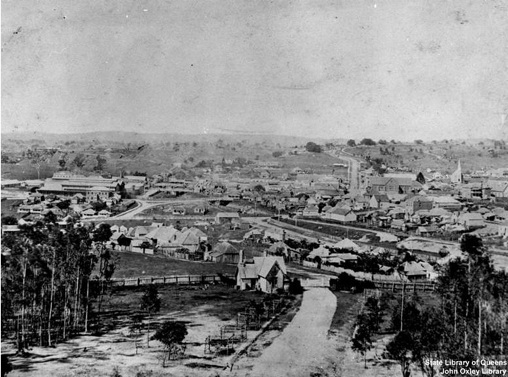 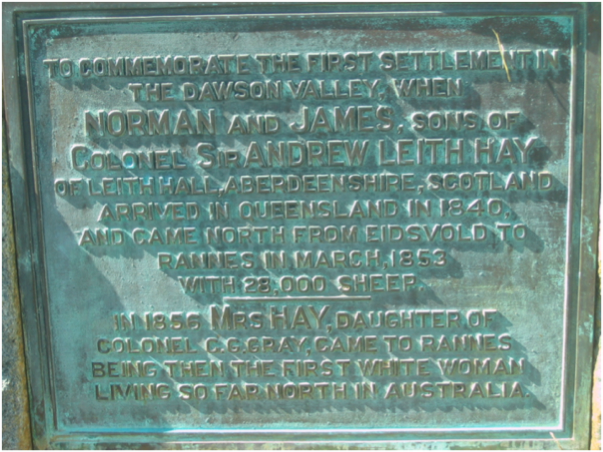 The Rannes marker in the Dawson Valley  around the site of the bark and log cabin built by the Leith Hay brothers in the 1850’s.