Library – Books on the Leith family and archive

click on the links for further information and e-books 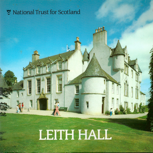 The National Trust Scotland’s literature from the mid 1960’s can be viewed by clicking  the image to the left. These are limited to the covers of the booklets. The National Trust for Scotland’s Leith Hall booklet provides a short overview and is informative with many images and describes the history and development of the Hall as well as giving snippets on the people who lived and worked there. There is also an earlier 1970’s version of this book with far more detail. These provide a really good insight and have many images on the different additions to the Hall under the Leith’s. More.. 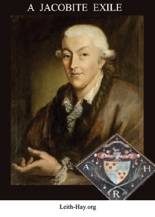 The are various books available on the history of the Leith Family and later Leith-Hay’s as well as the book on Andrew Hay of Rannas – A Jacobite Exile, by Alistair and Henrietta Tayler, which gives an account of the person whose name is behind the double barreled Leith-Hay surname from the late 1700’s onwards. Col Alexander Leith at the time assumed the name on being entailed heir to his great uncle. More.. 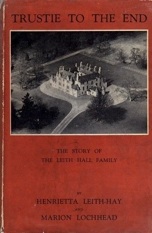 The most detailed book on the Leith family and the head of the family is Trustie to the End – The Story of the Leith Hall family. This was written in the 1950’s by Marion Lochhead and Henrietta Leith-Hay who wrote the final two chapters on her husband and son. This book details the whole line and is particularly informative on the John Leith line ending in the male line with Charles Arthur O’Neill Leith Hay in September 1939. Note the ending of the book is not entirely accurate as the main line of the family certainly continued from Charles’ father’s brother’s and also sister’s families. More…

This book provides a history on the Harthill Leith’s who branched from the main family line in the 1500’s. Patrick the third son of Henry Leith of Barnis was the progenitor of this short lived branch. The family’s link to Harthill beginning on a charter granted under James V, dated 8th Dec 1531. The family produced a succession of colourful characters and culminated in one of this burning down the family home, which for many years left it in ruin until a modern day restoration. More..

The Castellated Architecture of Aberdeenshire (1849)

Lt. Col Sir Andrew Leith-Hay also wrote several books. The Peninsular War is a complete work on the Napoleonic wars in Spain and Portugal and is based on his own experience as an intelligence officer during the conflict as well as his position as an aide-de-camp for his uncle James Leith at the time. The Castellated Architecture of Aberdeenshire also details the historical houses of his home county. Sir James  Leith also has his own biography, which was penned after his death and Sir Andrew as his former aide-de-camp provides the details for this. More.. 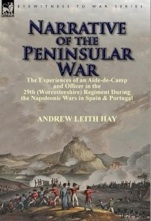 Andrew provides his three main reasons for publishing the work in his preface. Those being 1. Rescuing scenes omitted by abler commentators. Perhaps he is being a bit too harsh on himself there and too self-deprecating but maybe this was simply  his style. 2. Honour the memories of his forgotten comrades and their deeds   3.  His own vanity and wish to record the most memorable time of his life that was forever etched in his mind. More..

A paper review of this work back in the day almost 200 years ago details the following. The Memoir is written in a concise, manly, an perspicacious style : and to render it more generally interesting. It gives luminous precis of the important military operations in Spain, in Which the subject of it bore so conspicious a part, and in which also, from the honorable situations in which he was placed on the General’s personal staff, the writer was himself an actor and eye witness. On the subject of his own merits, the writer of the Memoir is modestly silent. Had it been the production of any other pen, the author would not have done justice to a brave active and zealous Officer, if he had not mentioned with the highest praise, Major Leith Hay’s conduct on all occasions in which his professional talents and energy were called into action. The book does not reveal too much about Andrew’s own dealings with his uncle whom he clearly looked up to. The large painting at the Hall of San Sebastian and the end game of the siege provides an indication of how strongly this time of his life left a mark on Andrew and also what imprint his uncle had on his own career and development. More..

Wellington’s Spies, by Mary McGrigor in 2005 is a modern day account on three Scot’s officers who performed intelligence work for Lord Wellington during Peninsular War. It details the death of one of them and escapes and experience of the other two. Andrew Leith-Hay being one of these. More..

Chapter 5, Leith and Maucune, in Rory Muir’s Salamanca 1812 contains information on Andrew Leith-Hay and his uncle James Leith and the 5th division facing Maucune’s French division in the battle. Rory Muir has permitted an extract of his work on this chapter, which I will be placing here soon. More..