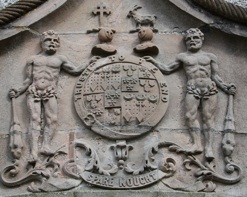 Leith Hall: The Arms of Charles Edward Norman Leith-Hay  (29/05/1940 Volume 34, folio 14) on the family grave in the former parish church (below rigth) and presently in family wing cellar at the hall. The Arms of the head of the Leith-Hay family are also displayed at the Hall entrance (left) and internally at the Hall.

Quarterly, 1st and 4th grand quarters, Or, a cross crosslet fitché Sable between three crescents in chief and as many fusils in base Gules, for the name of Leith: 2nd and 3rd grandquarters counterquartered 1st and 4th Argent, three inescutcheons Gules; 2nd and 3rd Azure, three cinquefoils Argent, over all a crescent Gules, for difference for the name of Hay of Rannes. Above the shield are placed two helmets befitting his Degree, that on the dexter with a Mantling Sable doubled Or and on a Wreath of the Liveries is set for Crest:- a cross crosslet fitché Sable and in an Escrol over the same this Motto “Trustie to the 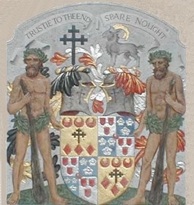 end” that on the sinister with a Mantling Gules doubled Argent and on a Wreath of the Liveries is set for Crest a goat proper attired and unguled Or, and in an Escrol over the same this Motto “Spare nought”. On a Compartment beneath the shield are placed for Supporters:- two wild men wreathed about the head and loins with laurel, their exterior hands resting on clubs all proper.

The images on the left relate to Andrew Hay whose name became part of the family name from 1789 onwards for the Leith Hall family. Andrew Hay of Rannas Esquire, heir male and Representative of Edmond Hay of Linplũm, who was second son of Sir William Hay of Lochawret (Ancestor to the Marquis of Tweedale) of his marriage with Alicia Hay Daughter of Sir Thomas Hay of Errole, his second wife, Bears quarterly 1st and 4th Argent three inescutcheons Gules. 2nd and 3rd Azure (For Hay), three Cinquefoils Argent (for Fraser). In the center of the shield a Crescent for difference. Crest a Goat passant Argent arm’d and Unguled Or. Motto, Spare nought. Matriculated 20 August 1764.

The goat passant also a distinction from the rest of the (Hays of Yester) who typically used a goats head. The two photos are from Rannes Aisle in Rathven from the resting place of Andrew Hay.

A good example of the very early Hay and Fraser heraldry is at the entrance of Neidpath Castle, with the goat’s head sitting on top of a strawberry signifying the union of these families in the past in the 1300s when Mary Fraser (co-heiress of Oliver Castle) married Sir Gilbert Hay of Locherworth ancestor of the Hays of Yester and their cadet family, the Hays of Talla from which Andrew traced his ancestry.

Andrew Hay’s mother Helen Fraser, the daughter of Dr Andrew Fraser of Inverness and his wife Mary Duff (3rd daughter of Alexander Duff of Keithmore) is also highly likely a descendant of the Frasers of Fairfield based on the Inverness baptisms in 1690 (Isobell Fraser 7/8/1690) and (Hellen 15/9/1691). Andrew Fraser was certainly the oldest son of Finlay Fraser (also known as Philip Fraser Provost of Inverness, descended of Foyers of the family of Lovat, who married Isobel Robertson in 1656). See grant of Arms to Philip Fraser of Inverness 1692.

There is no evidence to link Helen Fraser to one the many descendants of the seven brothers of Fruid (Frasers of Fruid). The only Andrew Fraser in that time frame that would fit the mould was William Fraser, third of Phopachy’s (Dr of Medicine and Minister) second son, Andrew, who was a student of the university of Aberdeen in 1672, described as frater Magistri Jacobi a Phoppachie, Inverness (brother of Rev James 4th of Phoppachie and Minister of Kirkill ordained 1661) (the Frasers of Phopachy and Torbreck, Mckenzie, p. 729) also author of the Chronicles of the Frasers, the Wardlaw Manuscript. The genealogical record from Inverness to Mary Duff and her later 2nd marriage in 1701 indicates that it is certain Helen Fraser was a descendant of what were to become the Frasers of Fairfield in Inverness.

Further info on the family and heraldry can be obtained from various volumes dealing on the topic. The Lyon Office is a source on this history and the following provides a record of Coat of Arms Matriculated by descendants from the earlier Leith family.

An interesting heraldic work related to one of the family’s marriages is also at the Hall in the courtyard where two lintels display the marriage of Harriot Steuart and John Leith Esq in the latter 1750s.  While there appears to be a heraldic (true lovers) knot after Harriot’s name. The heart can also refer to Hariot’s Stuart arms.

The Auchlunkart Stewart’s blazon: quarterly first and fourth, or, a fesse, chequy, argent and azure, between three cross crosslets fitchee in chief and as many cushions in base, second azure, three boars’ heads, erased, third, or, a lion rampant, rearguard, holding in the dexter paw a cross crosslet fitchee. Crest a dexter and sinister hand holding up a heart proper.

The heart on the lintel therefore referring to their union and also the heraldic symbolism of her family. 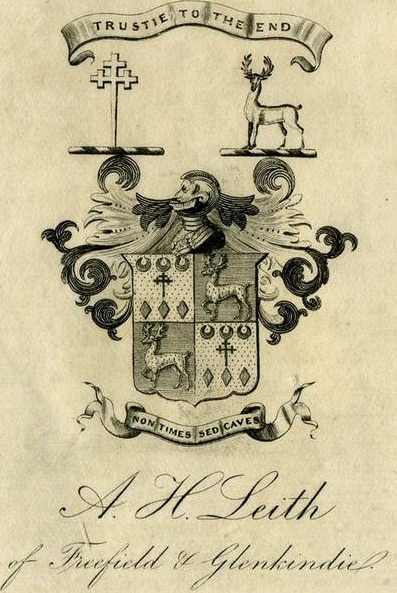 Same as Leith Hall and quartered with Strachan of Glenkindie

Quarterly, 1st and 4th, or, a cross crosslet fitchée sa. between three crescents in chief and as many fusils in base gules a bordure azure; 2nd and 3rd, az. a hart trippant or, attired and unguled gules., for Strachan. Crest—A hart at gaze ppr.

Mottoes—’Trustie to the end’ and below shield “Non times sed caves.”

Armorial bearings – (from 1803 the head of the Leith-Ross family) Arms: Quarterly 1 and 4. or three water-bougets sable, a bordure of the second; 2 and 3 quarterly, i, and iiii. or, a cross crosslet fitchee sable, between three crescents in chief and as many fusils in base barways gules, all within a bordure azure (for Leith of Freefield); ii and iii, azure, a stag trippant or, attired and unguled gules (for Strachan of Glenkindie). Upon the escuthcheon is place a helmet befitting his degree, with a mantling gules, doubled argent ; and for his Crest, on a cap of mantenancea water bougets sable.

Mottoes (above the crest) – “Agnoscar eventu” (below the shield) “Virtue have virtue.”

For heraldic history since 1889 on the Forbes-Leiths.