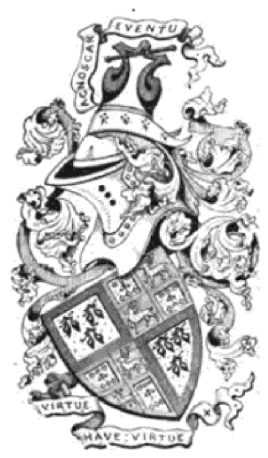 This is a brief account on the Leith-Ross family that descended from the Leith’s of Freefield and Glenkindie. Further information is available in more detail on the North American links of the family.

John Ross, of Arnage, b. 13 March 1707, d 3 May 1789, m. 6 June 1728, Elizabeth, daughter of Turner of Turnerhall, and his wife, Margaret, daughter of John Roes of Rose-Hill, a cadet of the Kilravock family, and had issue, besides four sons and five daughter, who all died young and unmarried, two daughters. Co-heris of Arnage, viz:

John Ross Leith, afterwards John Leith-Ross, of Arnage, b 29 September, 1777, d 1839, a  W. S. in Ediburgh before he succeeded to Arnage in 1803, when assumed his mother’s surname and was by Patent of Arms authorised to bear his mother’s arms quartered with the arms of Leith of Freefield; was Deputy Lieutenant and Magistrate Co. Aberdeen; m 7 January 1807, as above, Elizabeth Young, co-heiress of Bourtie, and had issue, viz.

Armorial bearings – He bears for Arms: Quarterly 1 and 4. or three water-bougets sable, a bordure of the second; 2 and 3 quarterly, i, and iiii. or, a cross crosslet fitchee sable, between three crescents in chief and as many fusils in base barways gules, all within a bordure azure (for Leith of Freefield); ii and iii, azure, a stag trippant or, attired and unguled gules (for Strachan of Glenkindie). Upon the escuthcheon is place a helmet befitting his degree, with a mantling gules, doubled argent ; and for his Crest, on a cap of mantenancea water bougets sable.

Mottoes (above the crest) – ;Agnoscar eventu;” (below the shield) “Virtue have virtue.”

John Leith-Ross, Equire, Justice of the Peace. Born 1809, being the eldest son of the late John Leith-Ross. Esquire of Arnage, Writer to the Signet, Deputy-Lieutenant, by his wife Elizabeth, daughter of William young, of Theoddocksley, Provost of Aberdeen, co-heir of her maternal uncle, Alexander Anderson of Bourtie, in the county of Aberdeen.

And interesting article on John Leith Ross’ (born 1845) son  William Leith-Ross’ career in the army can be found at the below link. He was born in Meerut, India in 1884.

The Leith-Ross family has descendants in the USA and Canada from the earlier family who migrated there.

The last direct family member in the male line passed in 2012 at 100 years.

“Hugh Frederick (19th December 1912). Only son of the late Sir Frederick Leith-Ross and last of the direct Leith-Ross line of Arnage, Aberdeenshire, died in his 100th year 21st September 2012 at St Mary’s Convent, Burlington Lane, Chiswick, London W4 2QE where he was well cared for during the last 7 years. Beloved father of Carol and Felicity and most loving grandfather, great grandfather and great great grandfather..—Thanksgiving Service at St Mary’s, Monday 8th October at 3 p.m. followed by tea. All enquiries 0208 788 9577. Family flowers only, but donations, if desired, to St Mary’s.”[1]