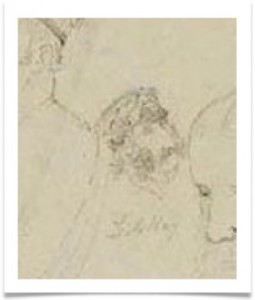 Norman Leith Hay’s story is also a very interesting note in the family’s history. This is also one that has not received much written recognition in the family’s past and should be noted. The possibility that a picture survives of Norman may be entirely plausible. The small drawing of a face above by James Gay Sawkins and with the Leith Hay name titled under the face in the mid 1850’s perhaps offering the best possibility that some kind of small yet significant portrait of him might have survived all these years.

James G. Sawkins was a travelled artist and his watercolours from North America, Cuba, Mexico, Hawaii, New Zealand and Australia survive until today and are  primarily held in collections in Australia on the account of them all being purchased or given as a charitable donation in the 1960’s.

The purpose of the above sketch with various faces and the names of the individuals inscribed underneath eludes me and I can only try to guess that they relate to the people the artist encountered on some part of his journey here in Australia.

Two possibilities come to mind here. The first coming from the date of the sketch ca. 1855. James Sawkins left Australia in 1855 and returned to the United Kingdom. Norman Leith Hay also left Australia in July 1855, and reportedly on the Marco Polo from Melbourne on the 21st july 1855 after going to Sydney with his brother James on the Boomerang on the 3rd of June. The purpose of his trip home is not entirely clear and his time spent in the United Kingdom was also relatively short as he returned to Australia quickly on the Prince Alfred departing London on the 29th May, 1856 after spending less than a year at home. Perhaps his parents old age at the time had something to do with his trip. His mother passing in 1858 would indicate her health was not the best. Perhaps his own affairs pulled him home since he at this time he had a daughter who was 9 years old or perhaps he simply went home to recuperate or obtain more funds for the projects in Australia.

The sketch above could therefore possibly link to passengers on a ship as it may well be possible that James Sawkins and Norman Leith Hay were acquainted. The artist may have drawn the faces of his travel companions on a long boat journey from Australia, a two to three month trip at the time. A passenger list departing Melbourne at the time may help in solving this.

The clear link between Norman and James Sawkins can, however, be established through his artwork. Perhaps the artist simply sketched the faces of the people he stayed with on his journey in Australia. The owners of the various properties providing the small portraits. Perhaps he simply drew the faces of the people, who made impressions on him when they crossed paths and he wished to record these.

The below image titled “Gigoomgan” (Messrs Hays) by the Sawkins providing the conclusive link to at least Norman, who had purchased this station in the Wide Bay area. A Google map search would show the location today. As per the Moreton Bay Courier April 1st 1851. page 1 s.  SALE OF STOCK AND STATION. – We are informed that Mr Norman Leith-Hay has purchased the sheep station of Mr. Cornfield, Gigooman, in the Wide Bay district ; the sheep (6000) being sold at 5s. a head, and the station given in. 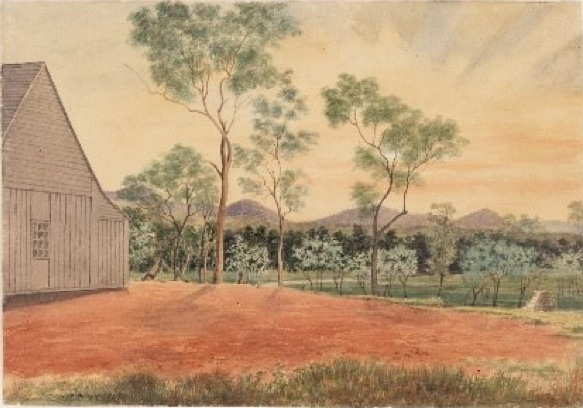 Norman’s further link to the place being highlighted by his brother James’ request to the Colonial Secretary Gerogre H. FitzRoy, Esq. 19 March 1852, requesting his brother’s appointment as a Magistrate of the Territory of New South Wales for Gigoomgan in the Wide Bay region. The Empire Sydney NSW paper on Saturday 18th April 1852 reporting the appointment of new Magistrates listing Norman Leith Hay’s appointment for Gigoomgan.

Clearly Sawkins was a guest at the Leith Hay’s property. Also not just a passer by for one day as evidenced by the above water colour and is other works from the region. Therefore, I would conclude that the subject has to be Norman Leith Hay. Gigoomgan was Norman’s property. It was not co-owned with his brothers. James was still linked to the Down’s at this time, although he had also acquired property in the Wide Bay region as he had only recently disposed of Toolburra with William who also remained to manage Canning Downs before his departure from Australia.

Whether the portrait relates to passengers on a ship or simply the faces of the people, who Sawkins encountered on his Australian journey does not however change the most likely sitter for the miniature portrait. The subject shows a Leith Hay, a person with long sideburns and a moustache with a hat. Andrew Leith Hay’s own portrait, with lengthy sideburns from an earlier time showing that father and son would have at least had some kind of similarity.

Further information on Norman can obtained from this link

Norman’s family tree and own story will also be updated in due time.