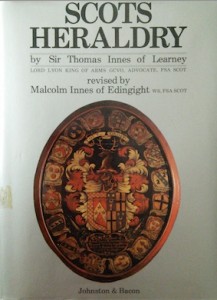 The dust cover on the 1978 version of this volume provides the following take.  Heraldry is a living science, more relevant to modern life than many people imagine. It is a colourful and decorative system of identification which transcends national boundaries and forms an important part of the nations’s history and pageantry.

This is the fascinating story of the origins of Scot’s Heraldry, its development and adaption to antiquity, simplicity and scientific accuracy, Scots heraldry also forms a brach of Civil Law on which the structure of Scots Law was reared, and a highly specialised branch of the law of heritable property.

Scots Heraldry is also a practical handbook: the basic heraldic terminology and principles are simply explained and illustrated, and information on how to obtain authentic arms is clearly set out.

Sir Thomas Innes of Learney, who was Lord Lyon King of Arms from 1945 to 1969, provided a comprehensive and lucid introduction to the subject of Scots Heraldry. This new edition has been revised and updated by his son, Malcolm Innes of Edingight, Lyon Clerk and Keeper of the Records, and Marchmont Herald.

In penning down his preface to Scots Heraldry  some 60 years ago, Sir Thomas Innes of Learney, Lord Lyon King of Arms described heraldry as a living science. It enters out lives more than we imagine and Scots Heraldry particularly so since it’s laws were subject to the Courts of the Realm and a growing amount of case law keeps steadily adapting the science to individual needs and the requirements of modern life and many requests for information show that a fresh handbook is necessary, dealing with Scottish Heraldry in lines not attempted in book at present available to the public and Scots beyond the seas.

The 1955 book and the revised 1978 edition (pictured above) by his son are valuable practical works on the subject and the understanding of the genealogical history and link to succession it entails.

Presently Heraldry in many walks of life is dismissed as a science for the privileged. Old toffs, who shine their cufflinks, snuff boxes and whisky flasks emblazoned with the Arms of their ancestors. Hand-me-down relics from the past. The privileged descent of old families from former aristocracy or landed gentry or the members of various modern worshipful companies whose liverymen use these networks as they did in the past as social hubs or connections.

In Scotland, however, Learney added the good old Scots custom drew no snobbish distinction between the burgess and the country gentleman, and clannish ties of relationship ran through every rank of society uniting its folk in homely heartwarm way that the abstract tenets of democracy can never achieve.

If anyone is interested in the application of heraldry for history I recommend visiting the Lyon Court site or the book as a useful insight into the old practice. In the present many of its meanings are lost to the public. However, Heraldry and the Scottish system in practice still forms a significant part of  Scotland’s cultural heritage and is deserving of its protection. From nations, cities and towns, to local councils, local or national associations to charitable groups and sporting teams, academic institutions or simply your corner pub the meanings of heraldic symbols and the need for their protection is all to evident.

On the Leith and later Leith Hay family or related families the following provides a list of Armigers from the historical source, with the last head of the family’s Arms displayed on his grave and at the Hall showing the family’s genealogical history (claimed from the Earl of Mar – see Cross Crosslets) from the earlier Leiths, the Hays of Rannes and Frasers from Andrew Hay.