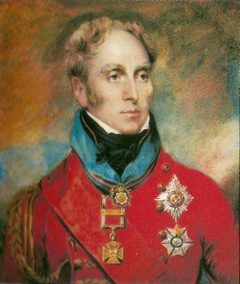 Memoirs of the Late Lieutenant-General Sir James LEITH, G.C.B., With a Precis of some of the most remarkable events of The Peninsular War. – By a British Officer. – 8vo.1818.

James Leith, the third son of John Leith, Esq., of Leith Hal, was born at the seat of his ancestors, in Aberdeenshire, upon the 8th of August, 1763. The early part of his education was conducted by a private tutor, after which he studied at the university of Aberdeen, and it ought to have been added, that anterior to this, he spent some year at the grammar school at Elgin.

Being a younger brother, Mr. Leith chose the army as a profession ; in consequence of which, he was sent to a military academy at Lisle, where he perfected himself in those sciences connected with the education of an officer. “His talents, the elegance of his manner and address, made him, at the commencement of his life, distinguished and courted. Possessed of a commanding figure, and an intelligent, handsome countenance, he added to generosity of disposition, a warmth of heart, and a polished deportment, that stamped him as a person of no common promise.”

In 1780, Mr. Leith joined the 21st regiment, and was soon after promoted to a lieutenancy in the 81st Highlanders. Having at length obtained a company, he served in that capacity until the of peace of 1783, when his corps was reduced. Captain Leith, however, was not destined to remain long unemployed, for in the course of a few months, he was appointed to the 50th regiment then at Gibraltar, and soon after his arrival there, was nominated aid-de-camp to Sir Robert Boyd, K.B., who was then governor of that fortress.

In the course of a few years, he accompanied General O’Hara, in the same capacity, to Toulon. When that gallant officer was taken by the enemy, the subject of this memoir was placed on the staff of Major-General Sir David Dundas, and on the evacuation of that city, he returned to England.

His services having now obtained for him the rank of major, by brevet, Mr. Leith procured leave to raise the “Aberdeenshire Fencibles :” at the head of which regiment her served for some years in Ireland. “During the rebellion.” we are told. “he was conspicuous for his activity and firmness of mind, and those qualities that found full scope for development in the mercy and forgiveness extended to many of the objects of mistaken feeling, whom circumstances placed in his power ; – and it is no slight eulogium, that during scenes, where so much bloodshed was inevitable, Colonel Leith’s humanity never became in the slightest degree questioned.’ In 1803, the subject of this memoir obtained a commission as colonel of the 13th batallion of Reserve ; and in the course of the following year, he was placed on the staff in Ireland, as a Brigadier-General. IN 1808, he was promoted to the rank of Major-General, and was soon afterward destined enter on that brilliant career in the peninsula, afforded by the occurence of the Spanish revolution. Under General Moore, he was appointed to the command of a brigade, and distinguished himself greatly, by the bold front and manly resistance he constantly exhibited against the enemy, whose advance was frequently checked by his bravery and good conduct. He also distinguished himself greatly at the battle of Corunna.

On his return to England, Major General Leith was immediately placed on the home staff ; but soon after repaired to the continent, and assisted in the siege of Flushing, after the surrender of which he was conveyed to Harwich, in a state of dangerous illness, in consequence of a violent attack of the fever of that country. In 1810, we find him serving under Lord Wellington in Portugal ; and he reaped new laurels at Busaco, by the promptitude of vigour of his charge against the French troops. But he was once more obliged to return to England in consequence of a fresh attack on the Walcheren fever.

We hear however, soon after his recovery, of his serving in Spain, and exhibiting fresh marks of his skill and gallantry, by the escalade of St. Vincente, which eminently contributed to the capture of Badajos. In an action with the Duke of Ragusa, he received a severe wound, in consequence of which the General was carried to Salamanca, and in 1813, was rewarded with the insignia of the Bath, on account of his very brilliant conduct at the battle of that name.

After being repeatedly wounded, Lieutenant General Leith returned to England, where he remained until 1814, when he was appointed commander of the forces in the West Indies, and Captain-General of the Leeward Islands.

Such was his gallant behaviour, and so amiable his manners, after his arrival in the colonies, that the privy-council of Guadaloupe, voted his 2000l. for the purchase of a sword ; while the King of France trasnsmitted the Grand Cordon of the Order of Military Merit, as a testimony of that distinguished conduct which had secured Martinique from revolt, and retained Guadaloupe in fidelity to mother country. But the Lieutenant-General was not long destined to display his talents and abilities, for on the 10th of October, 1816, he was attacked by a magnificent fever, which carried him off on the 16th, to the regret of the whole army. (source; The Annual Biography and Obituary, for the year 1819, vol 3, London)  – See further details on the most accomplished Leith soldier in the library section. His memoir was written by his nephew Andrew.

Liet General James Leith is the most notable of all the family’s military men. Far surpassing his older brother. His nephew Andrew, whom he mentored during the Spanish campaign perhaps gained many of his positive attributes from his uncle who was clearly one of Wellington’s most able generals.

He is buried at Westminster Abbey http://www.westminster-abbey.org/our-history/people/sir-james-leith

His papers can be accessed at the University of Manchester