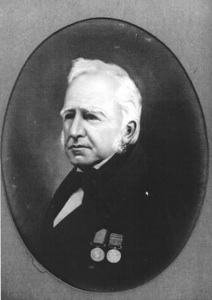 Though the people of Ipswich were fully prepared for the sad event which occurred at twenty minutes after 10 o’clock on Sunday night, when Colonel Charles George Gray breathed his last, the intelligence of his decease created a profound impression on all classes of the community yesterday morning when it became generally known. As a gallant soldier and as one of the oldest veterans of the British army, the Colonel commanded that respect and veneration here which even as a stranger would have been accorded to him in any part of the dominions of Queen Victoria, and indeed in any portion of the civilised world. But not as a brave warrior was he known amongst us—not by martially heroic deeds did he conquer the hearts of all, rich and poor alike, in our little society; the popular love was won by that gentleness and consideration for the weak which were such distinguishing features in the characters of knights in the age of chivalry. By the genuine and hearty interest he has taken in everything which tended to relieve the sick or the afflicted, or which promised to be for the general good, Colonel Gray has earned the hearty respect of every one, without exception; and therefore it is that he is mourned for as a friend, and that his remains will be followed to their last resting place this morning by the whole population of the town. Never was it less necessary than in the present instance to enumerate the kindly and generous acts of the departed, their record is to be found in every heart, and for many a day will their remembrance continue. Below we give a brief sketch of the eventful career of the deceased.

Lieutenant Colonel Charles George Gray was born in Edinburgh on the 28th of November, 1786; obtained a commission as ensign in the 77th Regiment in 1796; in the year 1800 a lieutenancy was purchased for him in the 78th Highlanders, but he went on half pay to enable him to complete his education. In 1803 he was attached to the 75th Regiment on full pay. His appointment to this regiment was in a great measure owing to the high esteem in which its officers held the memory of Lieutenant Gray’s father, who commanded it in Guzerat, and while in command died there from fever brought on by exposure. A memorial was sent by the officers of the 75th to his Royal Highness the Duke of York requesting his appointment to his father’s old regiment, to which he was accordingly gazetted, and in 1804 joined it in Calcutta; was present at the famous siege of Bhurtpore, where the 75th lost two thirds of its officers and men. In 1809 he was appointed to a company in the third battalion of the 95th Regiment (Rifle Brigade). On his return home he resumed his studies, and was for some time a student in the Military College at High Wycombe. In 1810 Captain Gray sailed with his regiment for Spain, and was through all the Peninsular war, in which he was twice wounded. The deceased Colonel held the Peninsular medal, with the clasps Toulouse, Orthes, Nive, Neville, San Sebastian, Badajos, Barrosa.

In 1814 he was appointed aide de camp to his uncle, General Johnstone who was ordered out in command of troops to reinforce the army at New Orleans. Being detained for some weeks in Cork by contrary winds, intelligence of the escape of Bonaparte having reached headquarters, he was ordered to proceed with the troops to join the army in Flanders, which fortunate change in his destination enabled him to share the honors of Waterloo, for which he received the Waterloo medal.

After peace was proclaimed he was quartered in different parts of Great Britain and Ireland, and in 1825, on obtaining his majority, he married the eldest daughter of Colonel Grogan, then on the staff in Dublin. He was soon after ordered to Gibraltar, where he was stationed upwards of a year, and on his return home he retired for some time on half pay. He was subsequently ordered to India, where he remained for five years and then returned to England. He had been but a short time at home when he was gazetted lieutenant-colonel in the 44th Regiment, then under orders for the East. He was, however, so heartily tired of the constant separation from his family, and his health having suffered from his previous sojourn in India, he was allowed to sell out, and in 1837 left with his family to settle in New South Wales. Colonel Gray arrived in Sydney, after a distressing passage of five months, in the ship John Barry, and, after looking about for some time, he determined to settle in Port Macquarie, then and for several years after a penal settlement. He accordingly took up his land grant on the River Hastings, about twenty miles from the township, where he remained until 1848, when he was appointed Police Magistrate of Gladstone, which settlement was abandoned three months after its formation.

In 1851 he received the appointment of gold receiver in the Sydney Treasury, which office he held till 1853, when he was appointed to the Police Magistracy of Ipswich; and in 1859, at the foundation of this colony, he was appointed first Usher of the Black Rod in the Legislative Council, which office he held until 1862, when, in accordance with the wish of the majority of the residents of Ipswich, he was reappointed as Police Magistrate here, and from which office he retired in 1867, after a service, military and civil, of upwards of sixty years.