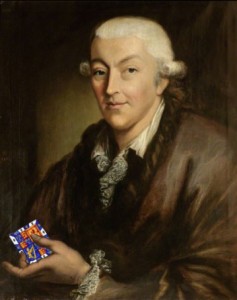 Born in 1713, Andrew was the oldest son of Charles Hay of Rannes, who married Helen Only child of Dr. Andrew Fraser of Inverness. On the both of July 1733 Andrew took Sasine of the Estate of Rannes on Crown Charter, which reserved the life-rent of his father Charles and his mother Helen Fraser. He attended a county meeting on the 1st of July 1742, and the minutes record that he then took the oath of allegiance to King George. But, after Prince Charles had raised the standard, Andrew Hay decided to join him, taking with his two servants named James Guthrie and James Donaldson; the latter was made prisoner at Inverness. Andrew joined the Prince at Holyrood in October 1745, and was appointed a Major of Horse in Lord Pitsligo’s regiment.  Alexander Macdonald in a letter to Clanranald, his cousin on the 25th January 1746 writes;- “Hay of Rannes, James Gordon of Clashterim, and some other gentlemen have gone to their homes from the Prince , but wither to reclaim the men of the Duke of Gordon’s country who have deserted, I can’t tell.”

There is no record of Andrew’s doings during the campaign, but Pitsligo’s regiment was in the van of every fight and helped to protect the rear during the retreat from Derby. At the triumphant entry of the highlanders into Manchester during their march south it was recorded by

Samuel Maddocks that the first man to enter the town was “Hay of Rannes, who was very remarkable among them, being 7 foot high.”1 (Andrew’s actual height was 7 feet 2 inches, as shown by a contemporary document at Leith Hall.)

He “lurked” for along time in the neighbourhood of Rannes, where, on at least one occasion, he was very nearly captured. Lord Findlater, writing from Cullen House on 4th November 1747 to the Lord Justice Clerk, says:- “Young Ranas escaped very narrowly from one of the houses that were searched.”

As his father Charles was still alive (and although an ardent Jacobite in the ’15, had not taken part in the ’45) no harm was done to the house or property of Rannes, and after Charles’ death in 1751, his widow continued the management of the estate on behalf of Andrew, to whom she supplied funds, both during his years of “lurking” and after he went abroad in 1752 He was one of those excepted from the Act of Indemnity, but towards the end of 1747 he appears to have been going about the country in a rather venturesome manner-for a proscribed rebel. In an unsigned letter to General Bland (P.R.0.), this passage occurs:-

“In the county of Banff, in the Village of Keith, the Informer was in a public house where Colonel Roy Stewart, an attented Rebell, and Hay of Ranus another of the gang was, and Clune Mcpherson. All these appear publickly at mercats and everywhere and act as proproators of their estates and visite their neighbours openly and stir up the Humours of the people and keep them well in heart by telling them of descents and French invasions, and ye Civil Magistrate takes no notice of it. Most of these things the Informer had from the gentlemen and ministers living upon the place, and that all this was so notoriously known, a proof of it would be easie, and that the common discourse was that the Civil Magistrates did nothing and left all to the Military, of purpose as they thought to throw ane Odium upon the King and say we were under a Military Government, and that it discouraged both the well-affected gentlemen and ministers when they saw the civell Government so remiss and attented Rebells walking about in Triumph.”

Whether it was in consequence of this report or not is not clear, but in the same year (1747) there was presented a petition from Andrew Hay as follows:-
Click on Andrew hay cont to follow this account on Andrew Hay from 1745 Rathven Parish Jacobites