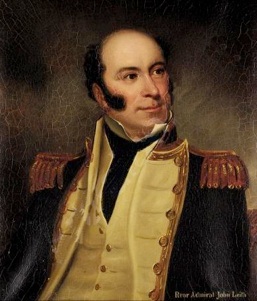 We regret to announce tim death of Rear-Admiral Leith (1854), who expired at Blackford on Wednesday, October 25. The following narrative of his services is from O’Byrne’s book:-

“John Leith, born at Leith Hall, county Aberdeen, the seat of his father, is the second son of the late General Alexander Leith Hay, by Mary, daughter of Charles Forbes, Esq., of Ballogie ; brother of Sir Andrew Leith Hay, Knight, of Rannes and Leith Hall, a lieutenant-colonel in the army, and M.P. for the Elgin district of burghs ; and nephew of Lieutenant-General Sir James Leith, G.C.B , K.T, Grand Cordon of the Order of Merit of France, Governor of Barbados, -and Commander-in-Chief of tho Forces in the Windward Islands, who died October 16, 1816.

“This officer entered the navy June 11, 1802, as first-class volunteer, on-board the Lapwing, 28, Captain Alexander Skene, which vessel, when soon afterwards off the banks of Newfoundland, was so closely chased for three days by the French 74-gun ship Duguay Truin  and 40-gun frigate Guerriero, that, in order to effect her escape, she was under tho necessity of throwing overboard her guns, boats, all her anchors and cables, but one, and all but one week’s provisions and water. In October, of the same year, he removed, with Captain Skene, to the Leander, 50, commanded next by Captains John Talbot, Henry Whitby, and Salusbury Pryce Humphreys ; and on February 23, 1805, he was present, under Captain Talbot, of the capture of La Ville de Milan, French frigate, of 46 guns, and recapture of her prize Cleopatra, 32. Following Captain Humphreys, in August,1806, into tho Leopard, 50, Mr, Leith was in that ship on June 22, 1807, when she compelled the United States frigate, Checapeake, to surrender, in consequence of a refusal on the part of tho latter to allow the British to search her for deserters. In April, 1808, he joined the Triumph, 74, Captain Sir Thomas Masterman Hardy, and after serving as master’s mate in the North Sea, and at the blockade of L’Orient, became attached with that officer to the Barfleur, 98, bearing the flag”, off Lisbon, of Hon. George Cranfield .Berkeley, who, on June 26, 1809, nominated him acting-liutenant of the Norge, Captains Edmund Berger and John Spratt Rainer. In the course of the same summer, we find Mr. Leith engaged in fitting out some Spanish men-of-war at Ferrol, then threatened by the French. In the following October on 10th of which month he was confirmed a lieutenant, he went back to the Barfleur, and on the promotion, in December, 1810, of the present Admiral Berkeley, succeeded him in the office of flag-lieutenant. Previously, however, to that event he had been invested with the command (which he retained until the final expulsion of the French army under Massena from Portugal) of the telegraph posts on the lines of Torres Vedras.

During the last scene of Badajoz, Mr. Leith, it appears, was present at the head-quarters of Lord Wellington ; and in April, 1811, he was there when it was stormed and carried. The Barfleur belng ordered home in 1812. He was next, after an Interval of a few mouths, the first he had enjoyed since his entrance into the navy, appointed, in April, 1813, to the Sceptre, 74, Captain Charles Bayne Hodgson Ross, flag-ship of Rear Admiral George Cockburn ; previously to accompanying whom into the Albion, 74, he took part in the attack upon Hampton, the capture of Oeracoke and Portsmouth islands (whence were brought off the Anaconda, of .20, and Atlas, of 12 guns), the occupation of Kent Island, and other services. ln June, 1814, he returned to England on board the St. Domingo, 74. He attained the rank of commander June 13, 1815, but was not again employed until September 1822, on the 4th of which month we find him appointed to the Bellette, 18, fitting for the West Indies, where he removed, June 28, 1825, to the Pylades, 18 ; was appointed, June 28 following, acting captain of the Isis, 50 ; and was confirmed November 11 the same year, into the Rattlesnake, 28. Being paid off on his return home with the Duke of Manchester, late Governor of Jamaica, in September, 1827, Captain Leith remained on hall-pay until appointed, February 6, 1837, to the Seriagapatam, 46, in which frigate he was again ordered to the West Indies, there to take charge of the Barbados station. On his passage out he took with him the Romney, 50, destined to form a depot for liberated negroes at the Havannah, where he succeeded in installing her after encountering much opposition from the governor, With the exception of a visit to Jamaica, on the occasion of Sir John Strutt Peyton being sent home in 1838, he remained senior officer at Barbadoes until July, 1841, when he sailed for Halifax to recruit his own health and that of his crew. Before his departure, however, he had the satisfaction of being presented with an address and a piece of plate by the inhabitants. He invalided at last from Halifax in October, 1841, and has since been on half-pay.