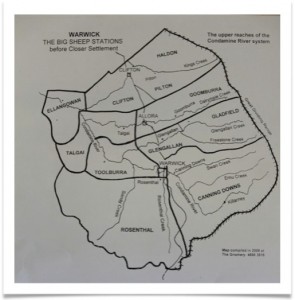 Much of the family information on the Leith-Hay brothers in Australia focuses on their move up to the Dawson Valley towards the mid 1850’s and the eventual end of their pastoral enterprise on Norman Leith Hay’s death. Due to the family also in part fading away post 1939 and little interest being noted on the Australian history in past literature on the family, this country is also a mere footnote in the family’s existing records despite primary source surviving at least clearly to the early to mid 1960’s on the subject.

In early Queensland history the brothers have been left as relative unknowns  post 1940‘s compared to the other pioneering families or personalities of the time. For example, the first movers on the Down’s the Leslies and the Leith-Hays’ talented friend and co-owner G. Fairholme, who left his mark through his writings and art, are much more celebrated with other early settlers. Likewise the Archers hold sway on their discovery of the Fitzroy after passing through Rannes. This is despite the Leith Hay brothers at least for a time holding the northernmost settlement at Rannes 120 miles to the nearest southern settlement on their own sizeable domain not too much smaller in area to that of a small European country at the confluence of what they sentimentally named the Don and the Dee.

It would in fact be hard to find even a local history buff who would know of their existence due to their relative obscurity. A written record nevertheless existed in form of letters from Australia to Scotland and this may have shed some light on their time here as well as early Queensland from the mid 1840’s. Certainly the brother’s motivations here are also evident in their letters to the Colonial Secretary at the time.

In hindsight also, looking at the past the story of the brothers attempt in the Dawson Valley at least partially may seem similar to something out the ‘Heart of Darkness’. A story not set in colonial Africa, but colonial NSW. Where with the lure of riches from uncharted territory on vast tracks of sheep runs, to feed the appetite of the newly industrialised economy in the mother country, drove the brothers further north in search of ever larger land holdings and evidently during their time areas that were not quite suited for the purpose they intended with the technology on hand. These days the region being mainly cattle country and of course the location of some huge coal mines.

Perhaps my above analogy is overly simplistic but some kind of similar thought cannot but help come to mind. The tragic death of one brother resulted in the abandonment of the family endeavour with perhaps the other two remaining brother’s simply no longer willing to take the all too evident risks of both man and nature and of course the arduous work this entailed in such a frontier environment. The effects of the risks taken by the four brothers can perhaps be seen in their fates.

Norman’s requires no further explanation. James L-H’s slightly untimely death in comparison to many of his long-lived ancestors and contemporary family members showing the difficult path he took. His elder brother William succumbing to disease in 1861 at his home in Elgin again highlighting the risks although in those days a younger death was nothing out of the usual.  Their younger brother Charles’ death at Inverness in 1913, although at old age of 83, but completely senile was possibly also a consequence of the past and the hard work that had brought him little reward during his short time spent here during his youth in the heat and perhaps not the most favourable climate on the tropic of Capricorn on their final pastoral settlement at Rannes, which was far inferior to, for example, the Archer brother’s settlement at Gracemere on the Fitzroy due to it’s more inland location and evident transport difficulties and susceptibility to drought.

Compared to the huge land tracts the brothers held and attempted at their later runs at Rannes and Banana in the Dawson past 1853, the initial entry by William and James in 1844-45 into the fertile area of the Darling Downs at the time was something that is also worth more detail as well. The Thomas Hall history on the Downs providing some insight into William and James at least, but not overly detailed or accurate in naming the three brothers there as Norman also arrived in 1848. Also it is in my view in some form slightly negative on them noting the brother’s as connections men. This analysis completely ignores the fact the Leslie’s and all of the other major land holders or early squatters were of similar background themselves and from even more illustrious families which had similarly colourful paths.

The historical record would in fact be quite positive on the Leith Hay brother’s when viewing the last Rannes survivor Edward McKenzie Scott’s letter to Florence, James Leith Hay’s daughter.

In his letter dated July 2nd 1914, he describes his gratitude to Florence’s dear father and uncles, that he was in a position to take life easy in his old age.The letter is attached in the James Leith-Hay section and can be viewed here. The fate of unlucky Rannes obviously also further summed up by his post script.

“Only fancy, a railway stations at Rannes, God help any one that attempts farming on Rannes. It is a regular ant bed, dry as a tinder box, broke everyone that had anything to do with it.”

In light of the above history, the earlier purchase by William, James and G. E. K. Fairholme of the foundation run of Toolburra on the Downs from the Gordon’s, who had purchased it from the Leslie’s was a more realistic enterprise on a prime location though ultimately too small in size for the brothers later ambitions. The Moreton Bay Courier of Sat 26 August 1848 p.3 describing the runs on the Downs listing Toolburra as a property of 60000 acres with grazing capabilities of 500 cattle and 15000 sheep. For a younger sons, whose father’s own estates in the old country perhaps totalled a fifth of the size of the country they now held in Australia this was an opportunity to make their own mark on prime agricultural land that could offer far more productivity than what was achieved in Europe. Indeed it was an opportunity for anyone with ability to make a go and achieve social mobility. Many of the founding settlers on the Downs forming what would be termed a squatocracy of important and wealthy land owners. The early settlement and sheep stations from the 1840’s to mid 1860’s are seen below before smaller scale subdivision. 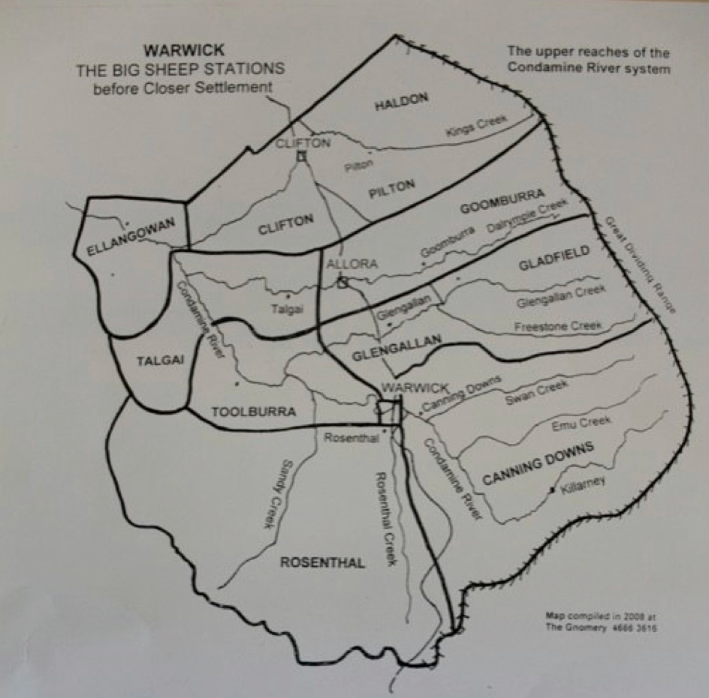 Photo taken from Map at Glengallan Homestead (click for close up)

The Toolburra run was as mentioned on prime location on the Codamine with the head waters flowing down from Canning Downs. It was also held land on the confluence of Glegallan Creek into the Condamine and was therefore perfectly located on a water source and excellent grazing country. These days the old runs are of course divided in to far smaller properties, but many of the historical links surviving. Toolburra was divided in to South and North Toolburra, which can be accessed via Warwick on the Allora Road or Sunflower Drive. The original Station House no longer exists, but North Toolburra is a cattle station and a later refurbished 19th Century colonial house and Gardens which is visitable and a site for weddings.

Canning Downs, home of the Leslie’s survives as a property till today and perhaps notably Glengallan House historical homestead which shows colonial architecture from 1868. Slightly after the Leith Hays, but built by a station hand who came with the Leslie’s and made his own fortune on the Downs and then lost it all. Interestingly out of the many items on display besides family artefacts, a Cavalry officers sword from the Napoleonic Wars is also displayed and almost identical to the one held by Andrew Leith Hay in his own portrait. An interesting note in historically significant region for Queensland, which was also first area for the export of commodities from Moreton Bay and named after locations from Scotland, from which the first European settlers arrived. 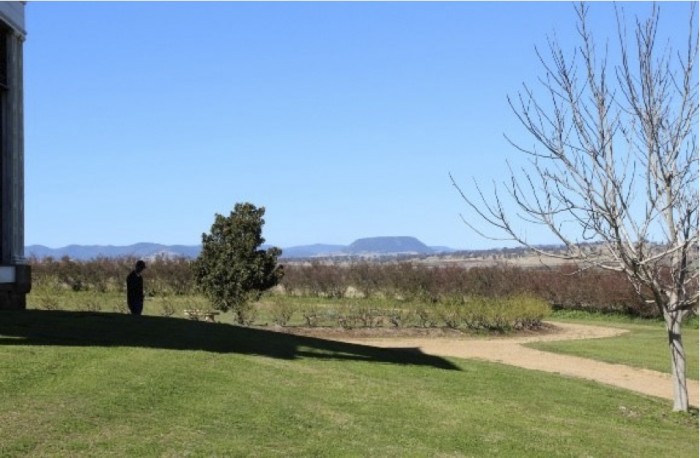 From Glengallan House looking at the same scenery sketched by Fairholme in the 1840’s and 1850’s from a different angle. 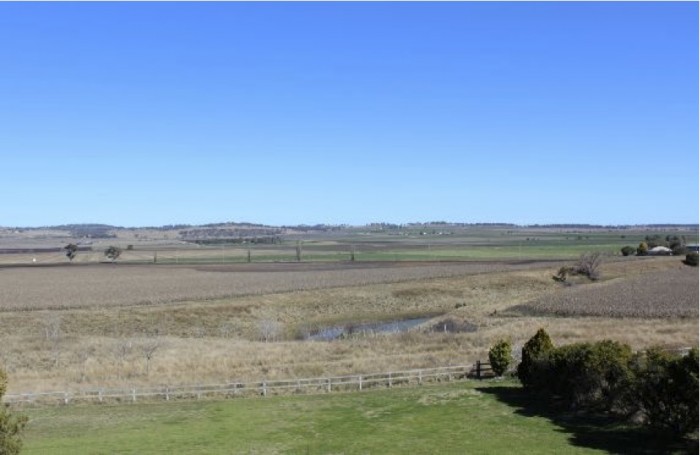 Looking east towards Toolburra owned by the Leith Hays an Fairholme beyond the rise and Glengallan creek immediately in foreground. 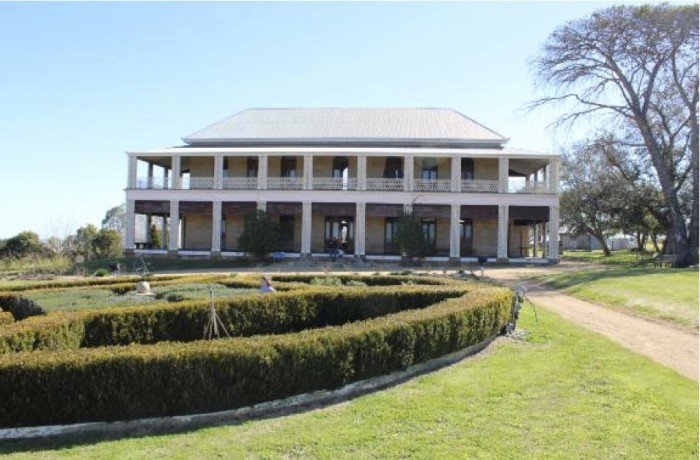 Darling Downs looking from old Leslie lands at Canning Downs towards the Great Diving Range in the background.

Short info on Canning Downs is at

The Southern Downs can also be explored on the Settler’s routes.

Accommodation varies and goes from the local motel to luxury like http://www.spicersgroup.com.au/property/spicers-peak-lodge/gallery on top of the Great Dividing Range.